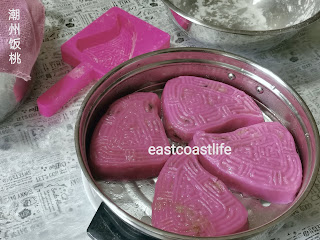 These peach-shaped steamed glutinous rice cakes (Png Kueh) is a Teochew delicacy. In Chaozhou, they are also known as "red shell peach cakes".

In China, the peach is a symbol of longevity and immortality as it is considered a divine fruit of gods. The Teochews make these delicious cakes as prayer offerings, seeking blessings of health, wealth and longevity. Therefore, most of the moulds for making these traditional snacks are carved with the Mandarin word "寿" which means longevity.

When I was a young child, whenever there is a festival or joyous occasions, all the adult women in the family would gather by the large dining table to make png kuehs. We children would play next to them, playing with the dough, moulding it into various shapes.

For the Teochews, red png kuehs represent joy, while white png kuehs are offerings for our ancestors.

Another version of savory filling is the salty mung bean paste. As for the png kueh with sweet stuffing, it has red bean paste.

The following is my mother's traditional recipe for Teochew Png Kueh.

Makes about 20-24 pieces depending on the size of your mould.

Preparing the filling:
-------------------------
The night before, wash the glutinous rice. Let the rice soak overnight. Soak mushrooms and shrimps in hot water until soften. Then diced the mushrooms. You might want to cut the dried shrimps into small pieces if they are big ones. Sliced Chinese sausage thinly.

Cooking the filling:
-------------------------
Heat wok, fry shallots with some cooking oil. Fry dried shrimps until fragrant, then add in diced Chinese sausage, preserved radish and mushrooms, Cook for about 3 mins.

Remove from wok and place into a pot. Do cover the rice with a damp cloth to prevent the glutinous rice from drying out. Let rice cool well before wrapping.

Boil the water. Stir the pink coloring into boiling water. The solution is pink. Pour boiling water into the rice flour mixture and mix quickly with a wooden ladle until a dough is formed. Add in mashed sweet potato here if you are using.

Next, use your hand to knead the dough until smooth, and it doesn't stick to the side of the mixing bowl.

Cover dough with a damp cloth to prevent the dough from drying.

Flatten each portion of dough and press thinly into a large round with your fingers. Fill each round with some glutinous rice filling, seal and form into a peach-shape (triangle). Trim off any excessive dough. Place into the mould and press the kueh gently to fit into it.

Turn mould over and knock the png kueh onto a lightly floured tray. Place them on a steaming tray and steam for about 15 mins or until cooked. Don't over steam the kuehs or they will become gooey.

If you still have leftover png kueh the next day, you can pan fried them with some oil. It will taste crispy and chewy.

Posted by eastcoastlife at 7:08 PM