Morning Chores on our Farm in Hainan 我在海南农场的早晨 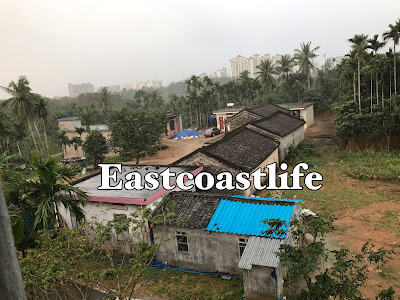 On my first morning in the village, I was woken up by the blasting of firecrackers at 5.15 am. Thereafter, it happened every morning. I would lay awake and wait for the sun to come out. GRRRR ....

As it was the Lunar New Year festive season, the firing of crackers would last until the 15th day of Chinese New Year. There was blasting of crackers at any time of the day, then followed by fireworks at night.

Surrounding the village are condominiums which are owned by mainlanders from the cold northern parts of China. They would travel south to Hainan island during the cold months as it is warmer. They like to stroll through the village, sometimes they would buy farm produce from us. 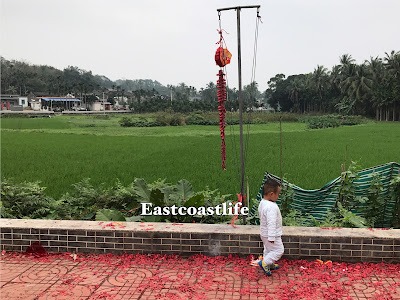 During this festive occasion, they would come to our village to let off firecrackers and fireworks. The roads and vacant lots in the village are littered with the remains of the red wrappings which are left around so as not to "sweep away good luck".

Can you imagine the amount of noise pollution around our house? 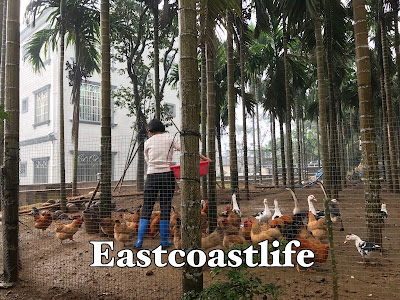 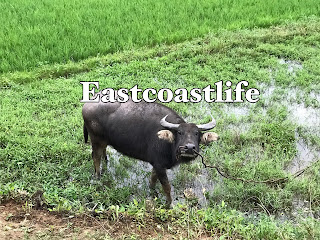 The water buffalo is worth more than RMB10,000. I offered to keep an eye on it as I was worried that it might get stolen if it is left alone. Sister-in-law assured me it would be safe, I could explore the village if I want to. 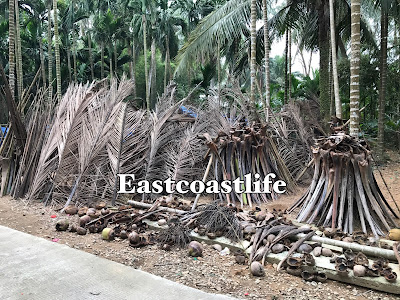 I offered to collect "fuel" for our wood burning stove. I went to our coconut plantation and collected the dried leaves and branches, then placed them to dry under the sun. 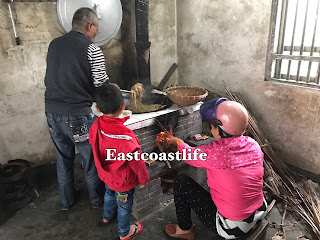 Brother-in-law was cooking Hainanese fried rice noodle for breakfast. His second daughter-in-law helped to fire up the wood burning stove and maintained the fire efficiently.

I watched and noted down the method for cooking this delicious dish. 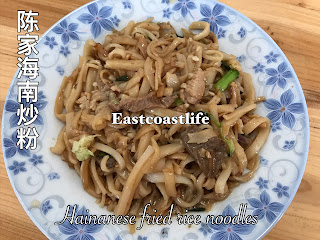 My plate of Hainanese fried rice noodle had lots of wok "hei" (a smokey, seared flavour). I think this can only be achieved using our wood burning stove. 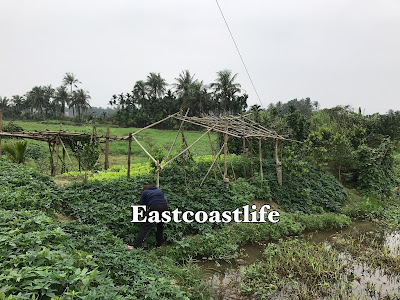 After a hearty breakfast. I went to help my nephew's wife to tend to our vegetable plots. It was really back breaking to do weeding and remove the dead leaves. I was horrified to find wriggly worms, our vegetables are not sprayed with pesticides.

It wasn't that fun when it comes to picking vegetables, I had to pick enough for twelve people's lunch. Fortunately there was no hot sun, it was a cloudy and breezy day.

I would have to break the news to hubby that I am giving up my dream of owning a farm. He would be ecstatic.

Posted by eastcoastlife at 8:30 AM