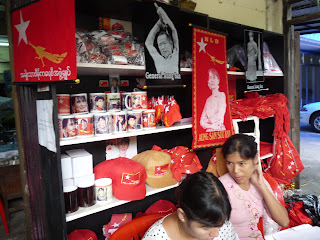 On my Yangon trip, I was hoping to meet Myanmar's pro-democracy leader and Noble Peace Prize Laureate Aung San Suu Kyi. I travelled to the headquarters of Myanmar's opposition party, the National League for Democracy (NLD), hoping to catch a glimpse of her. On the day I went, she just left for India. arghhhh ...... 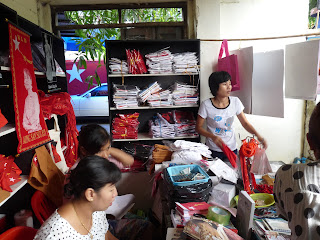 Many tourists are now able to freely stop and visit the NLD office. It is a hive of activity as foreign media beseige the run-down office with requests for interviews or to film almost every day.

Next to the headquarters was a shop that sells souvenirs and paraphernalia bearing the image of pro-democracy leader Aung San Suu Kyi. The merchandise brings in funds for the party. Hope they can sell more so that they can build a brand new office. 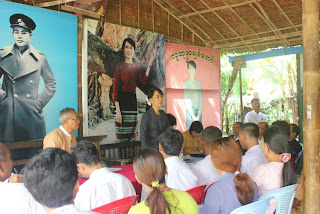 I was free to browse and take pictures. I found this picture of Aung San Suu Kyi speaking to her supporters in front of a mural of herself. 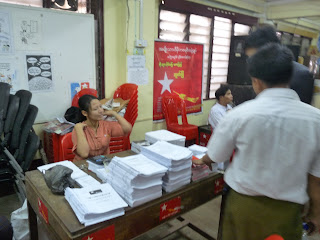 You can buy the party's manifesto here. 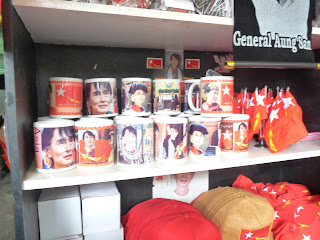 Merchandise bearing the once-banned image of activist Aung San Suu Kyi is a hot seller here. I bought some T-shirts and badges as gifts for my nephews and nieces. 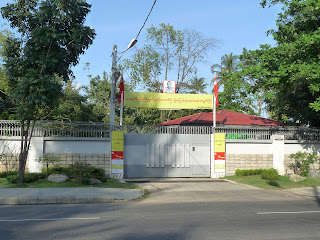 Later, our guide brought us to the personal residence of Aung San Suu Kyi at University Avenue. Security was tight and we were not allowed entry. There were quite a number of tourists who stopped by to take pictures. We took some pictures and left, I was disappointed not to be able to meet Aung San Suu Kyi.

Posted by eastcoastlife at 8:42 AM

Email ThisBlogThis!Share to TwitterShare to FacebookShare to Pinterest
Labels: Photohunt, travel and tourism