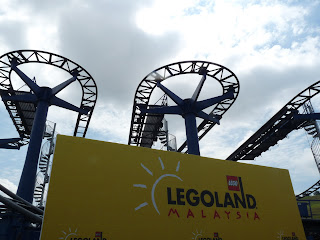 I came to know of Legoland only five days ago,.when I received an invite to a media briefing. It was  held in Iskandar, Johor. My first overseas blogging invite. Yeah!

Together with Straits Time reporter Lee Xin En and Bloomsberg journalist Joyce, we were chauffered across the 2nd Causeway. After clearing Malaysia Immigration, it was a 20-minute drive to the venue.

A tent was set up in the middle of the construction site. We met the Malaysian media comprising the press and TV stations. 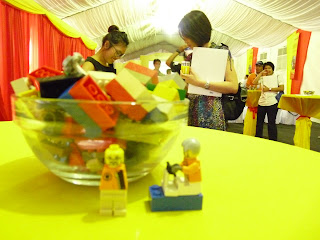 awww..... the Lego figure and bricks

Legoland Malaysia is the first Legoland theme park to open in Asia Pacific and the sixth in the world. Costing 720 million rinngit, the 76-acre theme park is specifically designed for families with children between 2-12 years of age. It will open at the end of year 2012. 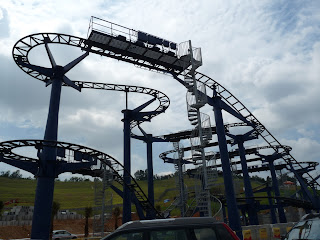 So far, it is 40% completed. The steelworks for the iconic roller coaster ride called the Lego Technic Test Track was unveiled at this event. 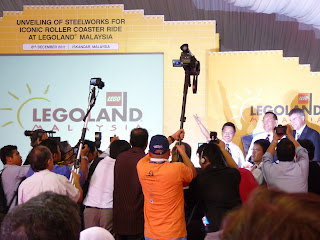 Nearly all of the rides are hands-on, so families can push, pull, pedal, program, steer, squirt, splash, crawl, climb and build the way through a full day of non-stop fun. Quite unlike usual onslaught of colors, animation and pictures from Pads, video games and TV program, though they all have their merits. 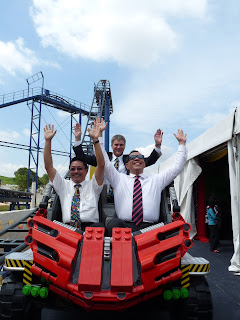 There was a question and answer session with Mr Muhammad Zainnal Ashikin, the CEO of Iskandar Investment Berhad and Mr Siegfried Boerst, General Manager of Legoland Malaysia.

I was driven to the lookout point where I could see the unfinished theme park below me. In less than a year, I would be able to come for rides. I am so looking forward to it. 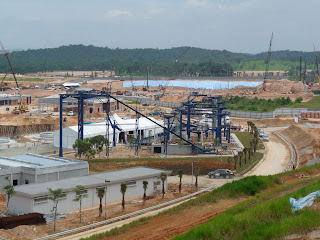 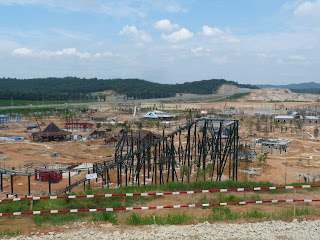 I brought back souvenirs of photos taken with the cute Legoland mascot and the cool Lego car. :)

Legoland also revealed the prices of its annual passes and a full list of Park Attractions.

Posted by eastcoastlife at 8:15 AM