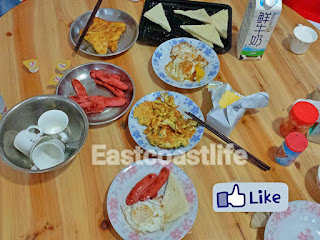 After days of having breakfast served to me, I woke up very early on the 6th day to prepare western breakfast for the children. Second daughter-in-law was also awoke. I offered to cook breakfast for the rest of the family but she politely declined. She cooked porridge.

I wanted to buy some pork from the market to make hamburgers but was stopped by second daughter-in-law because there was too much meat at home. So I went to the fridge to check out the ingredients. There were Taiwanese sausages which have a sweet taste. I prefer savoury sausages. 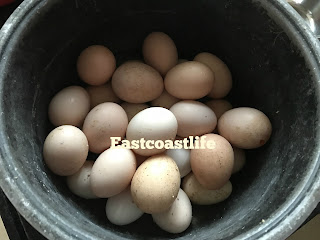 There was a lot of free range eggs from our farm reared chickens. We usually collect about 9 or 10 eggs daily. The children have grown tired of eating eggs, so I have to think of ways to entice them to eat the eggs. I used the eggs for cooking omelette, sunny-sides up and French toast.

I couldn't cook scrambled eggs because the butter looks weird. Elder daughter-in-law bought the expensive butter in Haikou, it doesn't melt at room temperature. As we use lard in our daily cooking, I assumed the scrambled eggs would not taste as good, so I didn't make any. 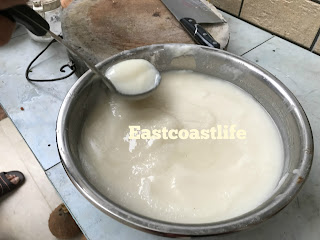 While I was frying the eggs. the children came down to help. Their mother had awaken them up to assist me. haha ..... They helped to toast and butter the bread, then set the table.

To my dismay, I discovered that there are no place knives, forks, butter spreader and breakfast plates. So we had to make do with whatever we have, they ate using chopsticks. LOL ..... there goes my enthusiasm for wanting to show them how to eat a western breakfast.

When I was making French toast, both daughters-in-law crowded round me to watch how it was done. They tasted the toast and liked it very much, so did the rest of the family. Both my brother-in-law and his wife who are not adventurous when it comes to food, took a slice to try.

I could see that my extended family were pretty pleased with the meal. Living in a tiny Chinese village, they are used to seeing such dishes on TV or read about them in newspapers. Now they were actually tasting the food for themselves and experiencing foreign dishes with different flavours.

Posted by eastcoastlife at 8:28 AM