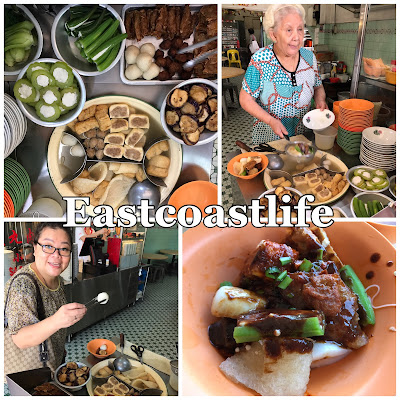 Foodie friend Angie has been craving for the old school Hakka yong tau foo in Kai Juan Coffeeshop @ Balestier Road. One night, she messaged me to meet her for breakfast at the stall the following day.

I arrived very early for our breakfast meeting, the elderly stall owner who is in her 70s, chatted with me while I waited for Angie. Business has slowed down for this pioneer hawker as many foreign workers who used to patronise her stall have returned to their own country due to retrenchment and lack of jobs.

We were interrupted several times as her regular customers stopped by for takeaways or breakfast, some would greet her as they passed by her stall. These regulars just help themselves to the sauces and self-serve while she is busy cooking. I  noticed that she would give the men more noodles.

We had a long chat because Angie was late, I waited for an hour. I enjoy chatting with the elderly stall owner who gave me a glimpse of her life as a working mother with five children.

Because we came early, there were lots of choice ingredients to select from. We had a hearty and yummy breakfast for only S$7! 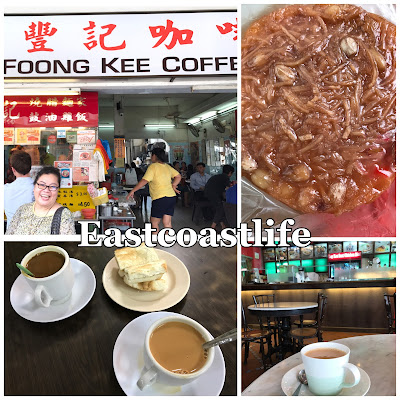 After our meal, we adjourned to Loy Kee Chicken Rice for teh si (tea with evaporated milk, S$1.80) while waiting for my hubby. We sat in the air-conditioned eatery for more than an hour, sipping Hainanese teh si. Hubby was only able to stay for a few minutes before he bade farewell. Naturally, Angie was not letting him off for keeping her waiting .... as usual the two started poking fun of each other. LOL

Angie and I went to Chinatown to collect her traditional Foo Chow sticky cakes (传统福州年糕). These Chinese traditional cakes with yam strips is a rare delicacy, it is the first time I am seeing one. Angie promises to let me have a taste of it later.

Angie brought me on a little tour of Keong Siak Road, pointing out the yummy food along both rows of shops. She started to crave for her coffee when we saw Tong Ah Eating House.

As it was lunch hour, the staff wanted us to sit on the sidewalk but the weather was too hot outside. We were allowed to sit in the air-con eatery only when we decided to walk out. We assured them we would just have our drinks and go. We ordered coffee, teh si and toasted bread (S$4.30). Coffee was still alright, we were disappointed with the other two items. 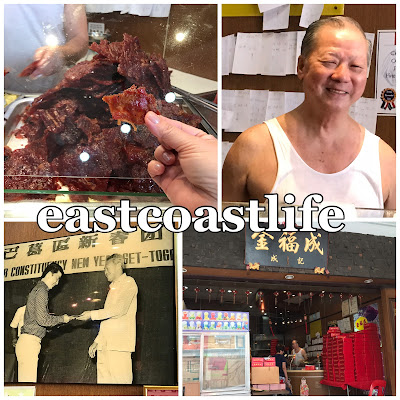 As we were walking towards Chinatown Complex, we stumbled upon Kim Hock Seng Seng Kee that sells traditional barbecue bak kwa (BBQ pork slices, S$52 per kg). The humourous boss Mr Ong Geok Hoo offered us a piece of bak kwa for tasting. Angie likes this bak kwa in its original flavour.

I was browsing through the photos and news clippings on a wall in the shop when I noticed a photo of a handsome man receiving an award from then Prime Minister Lee Kuan Yew.

When I asked if the "handsome man" was the boss himself, he proudly acknowledged it and jokingly said many people comment that he looks like a certain Hong Kong movie star. We were tickled and immediately took a liking to this affable man. Angie bought some BBQ pork slices for our tasting session. 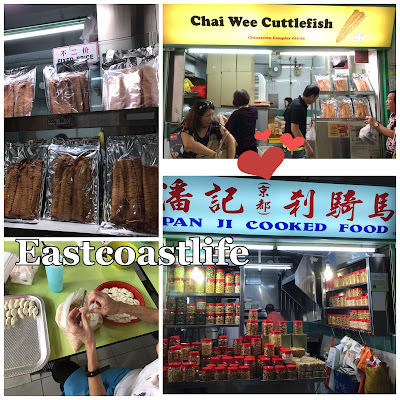 Angie recommended an old school crispy cuttlefish snack manufacturer in Chinatown Complex before we parted our ways. I went in search of it and found it in a corner of the hawker centre. It was doing a brisk business. I bought a small packet of their popular cuttlefish snack (S$9).

On the way out, I went to Pan Ji Cooked Food for its delicious traditional Chinese snack - Sar Kay Mah (sweet egg block), and found them busy making peanut puffs. I forego the vanishing traditional snack, bought some jars of peanut puffs (small jar S$18 each, large jar S$35 each) and melt-in-the-mouth tapioca coconut cookies (S$14) to support them. Business hasn't been good for this traditional snack shop, I want to show my appreciation for their dedication to keeping our traditional snacks alive.

What a day! It was an awesome day meeting and chatting with my fellow Singaporeans.