PhotoHunt theme :  Daub/Looking out of my window 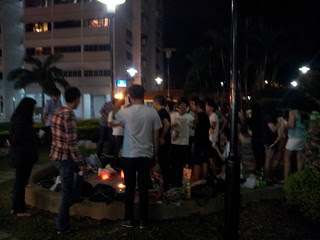 One night,  a group of 30+ youths (ages above 18) gathered at the garden below my apartment to celebrate the Lantern Festival and a guy's 21st birthday. They sang, played games, lighted lanterns and sparklers beyond 10 pm. The residents tolerated the ruckus until they started to make bonfires. Looking out of my window, I saw 3 bonfires.

A large group of diners at the nearby eatery watched but didn't stop them.

Concerned, I took photos first before rushing downstairs, requesting them to put out the fires. It was 10.18 pm. They resisted, jeered and taunted me. I took their photo with my mobile phone. When the group advanced towards me, I promptly called the Police. It was 10.22pm.

My son and husband came to my aid and brought along a camera. When the youths saw the camera and more residents coming to help, they started to pack up. 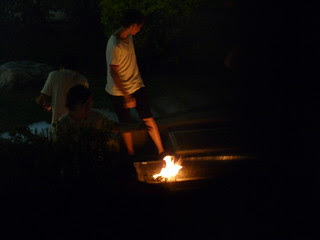 Two of them in their twenties approached me and apologised. They said they would leave and clean up. I accepted their apology, made sure the fires were completely extinguished and was able to return home at 10.54 pm.

The next day, I saw the cleaners carefully daubing the blackened stone work flooring with detergent so as not to damage it further.

It was extremely frightening coming face to face with a large group of raging youths by myself but somebody has to stop them before things get out of control.

All throughout my ordeal, the police didn't appear nor contact me to follow up. As usual, the lackadaisical Marine Parade Neighbourhood Police and Bedok Police Divisional HQ are reluctant to act.

Who do we call when such acts of vandalism happens? 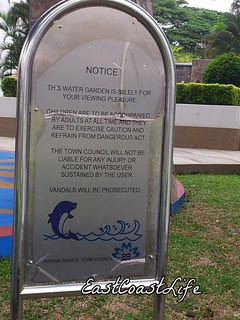 This garden usually sees quite a fair number of youths from the church across the street or students from nearby schools gather here on weekend evenings to have fun. We have to tolerate the noise until they leave which could be well after midnight. During our National Day, a group of them stayed beyond 3 am. Also there is much rubbish for the cleaners to clear the next day.

I informed the relevant authorities and gave feedback to my Member of Parliament ESM Goh Chok Tong, it has been peaceful ....... probably just for the time being.

Posted by eastcoastlife at 3:50 PM