I was ecstatic when I received an invitation to lunch personally cooked by Michelin-starred Chef Albert Tse at Conrad Centennial Singapore's Golden Peony. Chef Albert Tse was popping in from his China Blue Restaurant in Tokyo where he has been based for the past 7 years, to attend the World Gourmet Summit 2012. 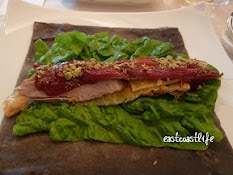 I was taught to roll this up tightly and eat it with his specially marinated green apples in red wine. The combination was heavenly! The fragrant black sesame seed pancake was not greasy and the freshness of the ingredients left me craving for more.

Chef Albert generously shared his recipe for making the red wine apple which I am going to try at home. 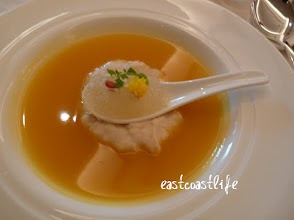 I have stopped eating bird's nest for quite a while but my curiosity got the better of me because I wanted to taste this incredibly beautiful dish where he blends mashed Hokkaido potato and minced chicken into the superior chicken broth.

It is great for young children, invalids and the elderly as it is nutritious and easily digested. 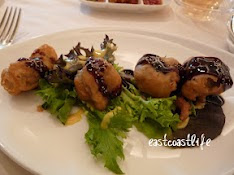 Love the tender Wagyu beef when I bite into the crispy batter. Amazing the Wagyu beef was still tender and juicy after being deep-fried in batter. Chef Albert revealed the brand of Japanese flour he used and, it is available in Singapore! 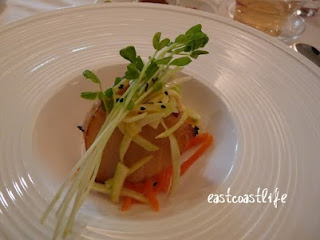 Chef called this the 'Char Siew fish'. kekeke..... Using French perch, the non-greasy texture of the fish matches well with the tangy sauce and shredded carrot. 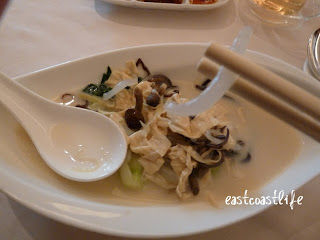 I was fascinated by this dish because the Michelin-starred chef uses our local rice noodle 'Mee Tai Mak', commonly known as the 'sick man's food' because we usually eat it when we are ill or have a loss of  appetite. :P 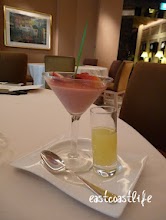 
It would cost me S$30+ for one of these desserts in Chef Albert's Tokyo restaurant, China Blue. He served me both flavors! The mousse was not too sweet. You know why?

Chef Albert uses Haagen Das ice-cream to make this mousse. This super-premium brand is known for its quality and little sugar content. He advises me not to discard melted ice-cream but to add in fruits to make a mousse. Great tip!

It was a pretty heavy lunch, and I am impressed by his creative uses of fresh and readily available ingredients. His dishes show that food can retain its most basic properties, yet look and taste spectacular, healthy, and tantalising.

Chef Albert is a pretty humourous guy, it was a relaxing and enjoyable session with him.

Not only was I able to enjoy his food but I picked up some great tips as well. :D 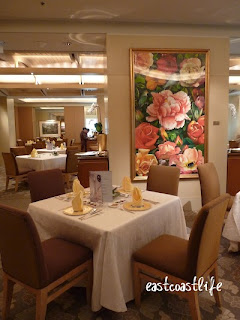 
Posted by eastcoastlife at 8:18 AM