Deepavali Nite 2009 was held on 9th Oct at Katong Community Centre. Guest-of-honour, MP Lim Biow Chuan was given a colourful and boisterous welcome by a band of Bhangra performers.

Residents from all races came together for this event. This is the way Singapore has been - there is cohesion between races and our city is well known for its spirit of friendship. 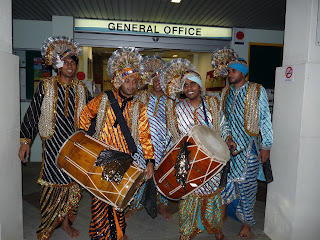 Bhangra performers to welcome our guest of honour

This couple are residents of Mountbatten and they enjoyed the Indian cultural activities very much. The wife had her hand painted by a henna artist. 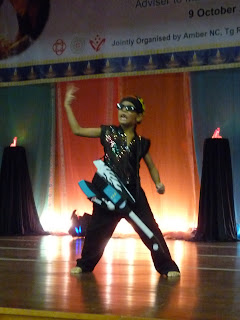 This young boy, aged about seven, did a stunning performance with his guitar.

The food served was North Indian cuisine which consists of thick, tasty gravies. For some participants, it was their first time tasting North Indian food. The food was so yummy that most of the dishes were cleaned out.

Posted by eastcoastlife at 5:53 PM