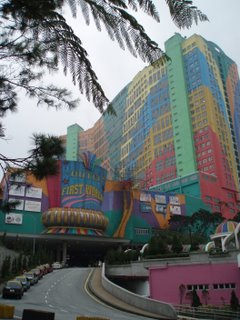 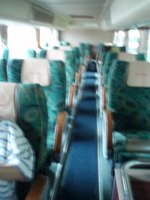 I went to Genting Highlands for a short getaway with hubby. We left Singapore at 7 am on Sunday & reached Genting at 1.40 pm. We took a double-deckered super VIP coach. It was very comfortable.

We stopped at Ayer Hitam for a break. 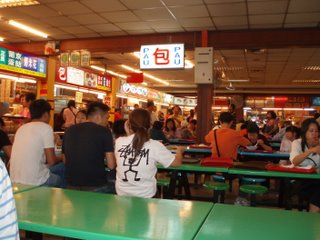 It is a must for all the coaches from Singapore. The drivers get free meals & drinks plus a rest while bringing business to the owner of this out of the way eatery. The price of the food here has increased by leaps & bounds! Whoa! RM6 for a bowl of noodles! I bought 2 pieces of fish cakes for RM2! 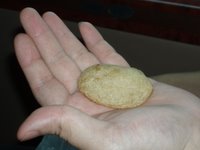 See how tiny a RM1 fish cake is!

The moment we arrived in Genting Highlands, it was a nightmare. It was chaotic. I started having a headache. I shouldn't have come on this super peak period. Chris wanted to help his friend then by taking over this holiday package from him. The friend's companion had to go for a surgery. It was supposed to be a relaxing vacation for us but it turned into a nightmare. 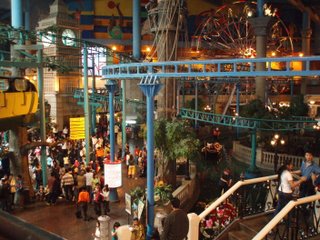 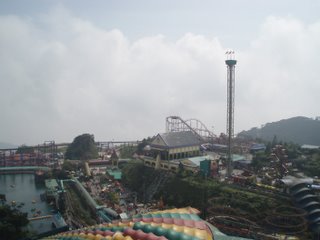 Add to that, we had a room where the ceiling of the toilet was leaking. We couldn't use the toilet & I had to use the public toilet in the lobby. We tried to change our room but all rooms that day were fully utilised, even standby rooms. There were some 5900 rooms in Genting resort! Incredible. 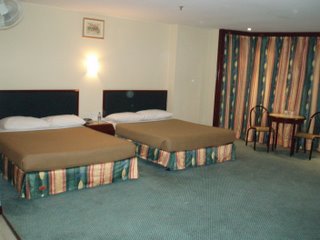 Chris didn't want to press them any more in case they decided to open a certain standby room, which might be haunted!

We had a buffet dinner at Coffee Terrace Restaurant on our first night. It was pretty expensive & the food was mediocre. We paid RM134 (S$58.30) for two.

I find the prices of food & beverages sold in Genting Highland to be exorbitant. RM16 (S$7) for a set of 2 pratas! RM6.50 (S$2.85) for a small packet of Nasi Lemak! RM15 (S$6.60) for a bowl of Pork Ball Noodles or Ipoh Hor Fun! RM13 for a Big Mac Meal! Is it because this is a holiday destination or has the food prices in Malaysia risen so much? Gosh, how do the ordinary folks survive? 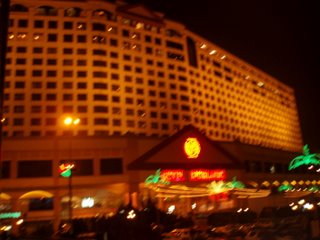 We took a peek at the casino after dinner. The place was so smoky & noisy. The PSI level must be way above 200! Many gamblers were puffing away at their cigarettes, whether in excitement or anxiety.

There were many elderly gamblers. I saw a few with walking sticks, one on wheelchair & a maid in tow & another one on clutches! Many were Singaporeans. Most of them had gathered their friends & neighbours to make the trip here. 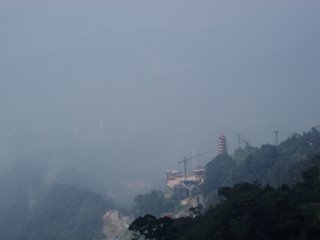 It was foggy & cold outside the hotel.

Gosh! I was suffocating to death in the casino & had to make a hasty retreat to my room. It was the same anywhere in the resort. The smokers blatantly light up, everywhere, disregarding the many young kids & babies around. I'm glad Singapore banned smoking indoors in public places. 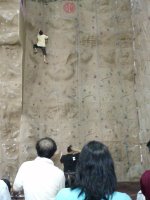 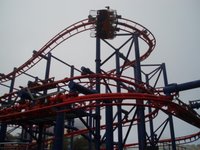 The next morning, the hotel changed our room. Only to discover the next morning, my bed was infested with bed bugs! I had red, ulgy swellings on my arms, legs & back. They were extremely itchy too.

I was glad when it was time to return home. Well, I was not happy for very long.

To our dismay, we found that the luxurious coach that we arrived in has been changed to a 25-seater coach. And we have to endure 7 hours of ride with some boors. One man who looked like a contractor was sitting next to Chris, & he took off his shoes in the coach. The smell was so pungent, we almost asphyxiated.

His Ah Lian (female boor) friend & mother who were sitting in front of me, talked loudly in Hokkien & kept raising & lowering their backrests. The woman would suddenly lower her backrest without notice, knocking my knees & jerking me from my sleep.

At one juncture, I was about to burst out when Chris held me back. I would have loved to pull her by her long hair & banged her head on the glass panes! I'm that violent when provoked.

Posted by eastcoastlife at 12:48 PM