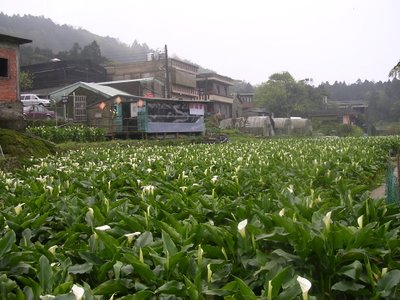 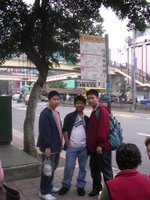 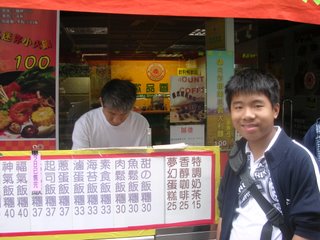 We got up early this morning. The hotel provided breakfast.

We bought 4 one-day passes (NT150 each) & took the MRT from Ximending station to Jiantan station. We saw many small eateries selling breakfast so we stopped at one shop to buy rice balls. I bought some sandwiches at a bakery & 3 bottles of mineral water.

We took a public bus to Yang Min Mountain. It cost NT15 per person. We had to change to another bus to go to the Calla Lily farms at zhu zi hu. It was a long walk from the bus-stop to the lily farms. The kids started grumbling, but when we finally found the farms, they were so excited. 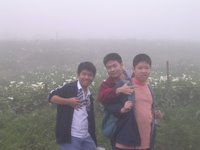 It was getting cold & thick fogs surrounded us. The kids found it interesting & enjoyed it very much. There were many elderly people & families with young kids. Many of them were having a great time plucking the lilies. The kids stopped me from plucking the flowers because they know they would be the ones carrying the lilies & they don't want to look silly with it. he he he..... 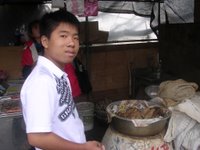 We saw a hawker selling baked sweet potatoes. And he claimed they are organic. He grew th 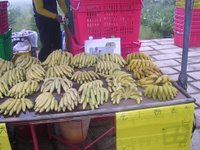 em himself. Jaymes bought one (NT45) to try. It was very sweet. We bought another one. We passed a stall selling mini bananas, they were called Milk Bananas. I bought some for NT100. They are the size of my fingers. They tasted sweet & creamy. When we ate them after lunch an hour later, they were frozen & the kids said they tasted like banana ice-creams. We bought some steamed black sugar man tou (buns). I bought a windmill. 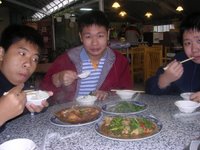 The kids were hungry & cold. I decided to eat at one of the many restaurants. They sell steaming hot pots of chicken soup. I ordered one. I also ordered Mayonnaise Prawns, Braised Tofu, Sweet & Sour fish, Wild Boar fried with Doumiao, Stir-fried Sweet Potato leaves. It cost NT810. After lunch, we took a bus to Beitou. From Beitou MRT station, we took the MRT to Xinbeitou. 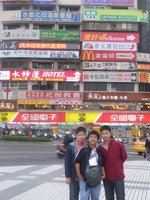 u MRT station, we met a lady promoting her hot spring resort. We decided to go for a dip in the hot spring. We walked for 10 minutes before we reached the hotel. There is an open-air hot spring pool, but you have to go in naked. The boys were shy so I booked a private room for 3 hours, it cost NT850. When we went into the room, we realised we were conned. It was a normal hotel room. The receptionist told me the water from the tap is hot spring water, I could fill the bath tub in the bathroom & soak in it. The kids were so disappointed. Finally they agreed to go to the open-air pool. I stayed in the room.

The kids later told me there were 3 pools in the men's bath. There was a hot pool, a warm pool & a cold pool. They took a dip in each pool. They stayed longer in the warm pool, the cold pool was freezing cold. There were only the 3 of them so no one else saw them in their birthday suits! ha ha ha....I think they enjoyed this hot spring experience. 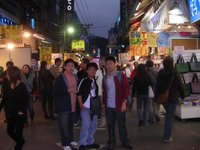 At around 6.30pm, we left for Shilin Night Market. The kids were pretty tired by now. They had no mood for shopping. I bought some curtains & books. The kids were dragging their feet, so I decided to buy dinner back to the hotel.

We searched for the famous Shilin XXL Chicken Chops. It was huge. It cost NT45 each. There was a long queue of people. I bought some Shanghai Sheng Jian Bao (pan-fried buns,NT100 for 11). I bo 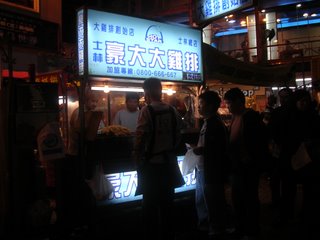 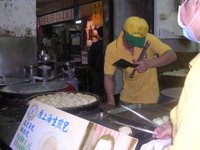 Posted by eastcoastlife at 2:20 PM