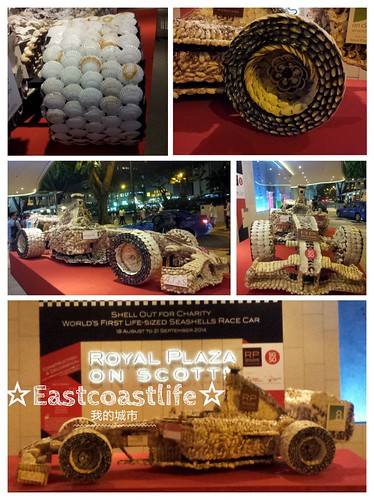 The culinary team of 10 chefs and culinary staff, led by RP’s Executive Chef Darren Ong, took 1130 hours to complete this structure which measures 4.40 metres long, 1.90 metres wide and 1.30 metres tall. A total of 14,880 shells (scallops, clams, mussels and oysters) were collected to decorate the car. The shells are from seafood consumed at the hotel's buffets.

In previous years, the culinary team has created other life-sized race cars with chocolate, pasta,  macaroons and bread.

Posted by eastcoastlife at 9:48 AM

Email ThisBlogThis!Share to TwitterShare to FacebookShare to Pinterest
Labels: Cool things to do in Singapore., Wordless Wednesday