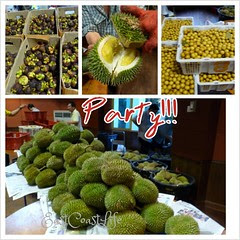 500kg of durians, 50kg of mangosteens and 50kg of longans!! Residents of Mountbatten constituency were ecstatic to see these fruits when they came for the Fruit Fiesta@ Katong Community Centre. 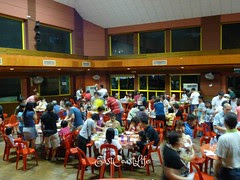 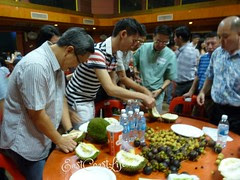 A variety of durians were served at this party. Durians free for all includes D13 and Red Prawn. Due to limited stocks, Black Pearl, Golden Phoenix and Mao Shan Wang durians were offered as prizes for table games. 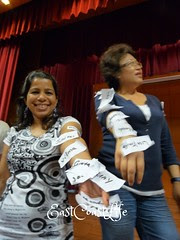 Each table sent a representative to participate in the table games. Participants challenged one another to see who could eat the most longans within 10 minutes and to produce the names of members at their table. It was hilarious. Our table won a Black Pearl durian. 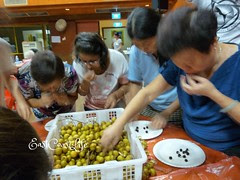 I was seated with 4 new immigrants and another 4 local aunties. Goodness, how they "attacked" the durians!! I was particularly embarrassed by the disgusting manners of the 4 aunties. They seemed as if they have just been released for the Lunar 7th month. I made sure the new immigrants had enough to eat and went round taking pictures. I have been eating lots of durians for the past month and was getting tired of them :P

While taking photos, I discovered a few people had secretly packed durians to takeaway. Whoa! This is too much. Takeaway is not allowed. Should I send the photos to STOMP?

Posted by eastcoastlife at 1:38 PM

Email ThisBlogThis!Share to TwitterShare to FacebookShare to Pinterest
Labels: Cool things to do in Singapore, Mountbatten Constituency, Wordless Wednesday