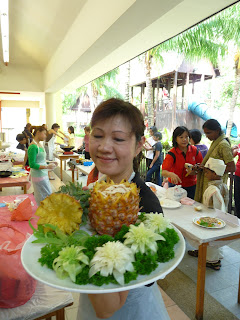 Maggie with her Pineapple Rice
On 18th July 2009, in conjunction with Racial Harmony Day, Katong Community Centre held a cooking competition themed 'Potpourrie With Rice'. Participants have to come up with a rice dish for 2 - 3 people.

There was overwhelming response to the competition, 14 contestants representing various ethnic races were picked to showcase their cooking skills. There was also a Korean mother who demonstrated her spicy Kimchi Rice. 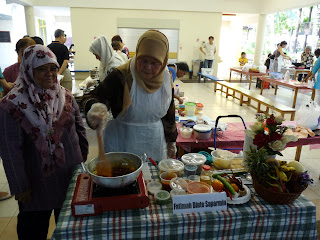 Mdm Fatimah's Rice with Mutton won second place.
Celebrity Chef Eric Teo was the main judge. He is the Executive Chef of Mandarin Oriental Hotel and also the President of the Singapore Chefs Association. 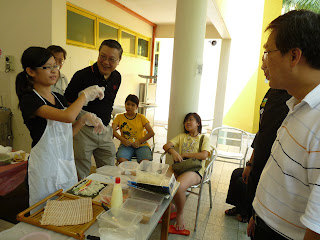 Youngest participant Cheryl Marsh (age 15), won 3rd prize with her healthy sushi. Cheryl lives with her grandmother and learns to cook from her at a young age. A student at Broadrick Secondary Schoool, she is a lively and independent girl who not only takes care of herself but looks after her grandmother too. 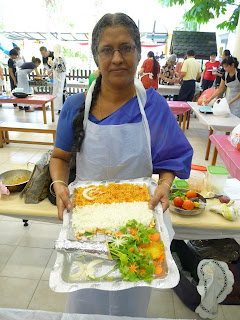 A participant with her creative dish. 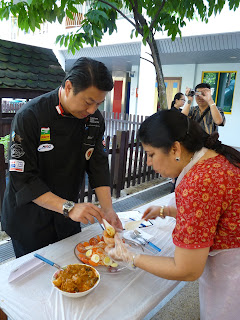 Chef Eric tasting a dish
Chef Eric gave cooking tips to the participants as he went round tasting their dishes. He is the idol of many ladies present that day. They were in awe of him, including ECL. :D 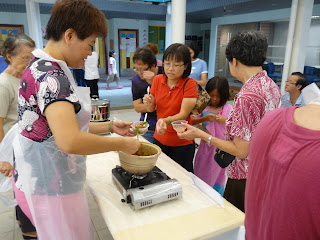 The wonderful aroma of delicious food filled the air. We got hungry and couldn't wait for the contestants to finish their cooking. hehe.... Every one got to taste the dishes after the cooking competition.

The participants were great cooks and many presented their dishes creatively. The judges had a tough time deciding the winners. 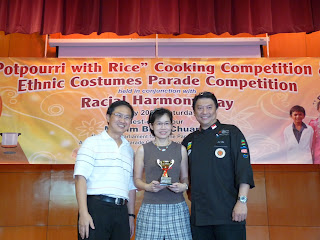 Vivian Ler with MP Lim Biow Chuan and Eric Teo
First prize went to Vivian Ler whose unassuming dish of Glutinous Rice, which she learnt from her grandmother, won the hearts of the judges. She was even using her grandmother's wok to cook her winning dish. She won a S$100 NTUC voucher plus a trophy. 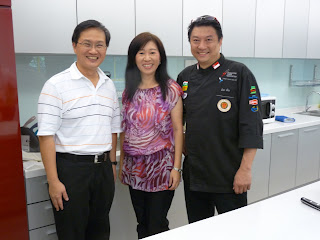 First Commenter - yenjai.net
Posted by eastcoastlife at 9:42 AM